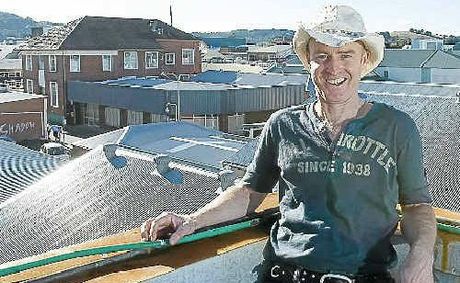 BUDDING North Coast film-makers and screen writers were treated to advice from an expert in Lismore this week.
Ross Grayson Bell, the Australian born producer of the critically acclaimed film FIGHT CLUB, which starred Bad Pitt, was in town to address a seminar arranged by the organisers of the Queer Fruits Film Festival.

Back in Australia after 20 years working in America and London, and now the head of screen writing at the Australian Film Television and Radio School, Mr Grayson Bell charmed his captive audience in a two-hour plus presentation in which he said the key to making a good film lay in coming up with a good, and sometimes simple (but not simplistic), concept.

“Concept is something we have shied away from recently in Australian films but where we have embraced it – CROCODILE DUNDEE, MAD MAX, STRICTLY BALLROOM – these films are world-wide hits,” Mr Grayson Bell said.
“So we can do it, we know how to do it, we’ve just got to bite the bullet.

“Pictures are important, but people are going for the emotional story, they want to be transported and if a film doesn’t deliver that no amount of pretty pictures can save you,” he said.

Mr Grayson Bell also said the future of the Australian film industry looked bright as many expats return home to lend their weight to the local industry.

These include PJ Hogan, who made MURIEL’S WEDDING, and Stephan Elliott who directed THE ADVENTURES OF PRISCILLA, QUEEN OF THE DESERT.

“The funding bodies are increasingly creating the environment for all these expat film makers to come home again, which I think is very exciting,” Mr Grayson Bell said.

The Queer Fruits Film Festival will be held on December 29 and 30 at the Lismore Workers Club.