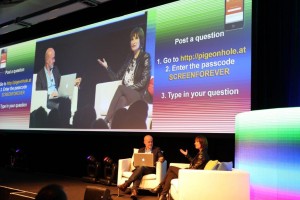 I had the great honour of moderating an “in conversation” with fellow Roger Corman alumni Gale Anne Hurd; co-creator of THE TERMINATOR, and producer of ALIENS, THE ABYSS and more recently the internationally acclaimed TV show THE WALKING DEAD, at the Screen Forever conference in Melbourne.

Screen Forever, which is an initiative put together by Screen Producers Australia in conjunction with the Victorian Government and Film Victoria, took place at the Crown Conference Centre, Melbourne between Sunday 16 and Wednesday 19 November.