The distinctive Liverpool sound has spread across the world in the past five decades. But even so, the world of music may have been unprepared for Barry Cox, 30, once a supermarket shelf-stacker but now a celebrated Chinese crooner.

Inspired by a wish to do something a bit different as a teenager, Cox decided to learn Chinese.

Not content with that, he decided to take up Canto-pop, a style of love song generally regarded as too saccharine for western tastes but which has teenage Asian girls swooning. 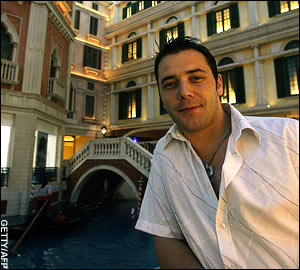 Now, after years in which his reputation has grown – at least as Gok Pak-wing, as he is known to the Chinese – he has finally found star billing, singing at the Venetian hotel, the new mega-casino in the Chinese gambling haven of Macau.

There has even been talk of a film being made about his unusual path to fame.

Mr Cox decided to take up languages after leaving school with five GCSEs at 16.

He gave Spanish a try, but decided his fellow students were too well-educated for him to make his mark. So he switched to learning Chinese instead.

He took an unconventional route by walking into his local chip shop and asking the Chinese owners for a pie and language lessons. Luckily, the owner’s nephew was looking for English lessons. The two helped each other out and became friends.
Gradually, Cox became a common face in the Liverpool Chinese community’s favourite bars and karaoke lounges.

He was not at the time aware that there were different dialects of Chinese, so ended up learning Cantonese, the dialect of Hong Kong and south China, generally recognised as far more difficult than Mandarin, the national language spoken in Beijing and the north.

After years spent mastering its nine tonal variations with all-day conversation classes in the chip shop, at the local pub with his new Chinese friends, and at a Chinese supermarket where he took a job as a shelf-stacker to help, he moved on to singing.

He was overwhelmed by a concert given in Manchester by Leon Lai, one of Hong Kong’s favourite heart-throbs, and entered a local singing competition at Chinese new year.

”I sang it terribly but everyone applauded, I guess because it was so out there,” he said. After that, he had singing lessons.

In the late 1990s, by now in his early twenties, Cox started attracting national attention – and a couple of years later decided it was time to aim for the top.

His initial attempts to break through in Hong Kong proved unsuccessful.

Producers and impresarios were not sure what to make of a new, white face on the block. Still, Cox was hired for a few performances, partly as an oddity, and even won a singing competition against local rivals. Having achieved his big break in Macau, he has no regrets about his choice of career, saying that if he had stayed in England he would probably still be working in a supermarket.

”When you go back, you see all of your friends doing exactly the same as 10 years ago,” he said.”I have got out of the rut. I do things and have done things that most people could only dream of doing.”