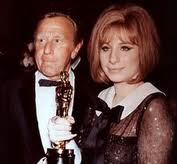 Today I started working for the legendary producer Ray Stark as a creative executive at his offices on the Warner Bros. lot in Burbank. Ray is one of Hollywood’s most successful independent producers, whose films included Funny Girl, which made a star of Barbra Streisand, plus The Way We Were, Night of the Iguana and 11 projects written by Neil Simon, most notably The Sunshine Boys and The Goodbye Girl.