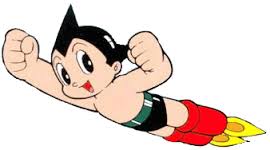 I was in Tokyo last week to discuss acquiring the film rights to ASTRO BOY with Takayuki Matsutani, President of Tezuka Productions. Of course, the late Osamu Tezuka, aka ‘The God of Manga’, created the animated TV series ASTRO BOY (1952 – 68) which was a staple of my childhood television. The meeting went well and I now have to come up with a take on how to reinvent the character for today’s cinema audience. This will involve a return trip to Tokyo in June.