In last week’s On the Beat Column, editor Anita M. Busch criticized those responsible for bringing the violent FIGHT CLUB to the screen. Ross Grayson Bell, one of the producers of the film, responds:

After Anita M. Busch’s comments last week about “Fight Club,” I felt the need to respond on a personal level. As such, I speak only for myself in making the following analogy.

When you go to an AA meeting, or any 12-step program, people get up and share the horrors of their addiction. They tell of lost days, alienated friends, crashed cars and the lives they have nearly lost. It is a gory and often brutally honest retelling of some of the darkest, most hopeless days imaginable; they rip themselves open, expose their emotional innards and, for the individuals gathered to listen, it is cathartic. Indeed, sobering. 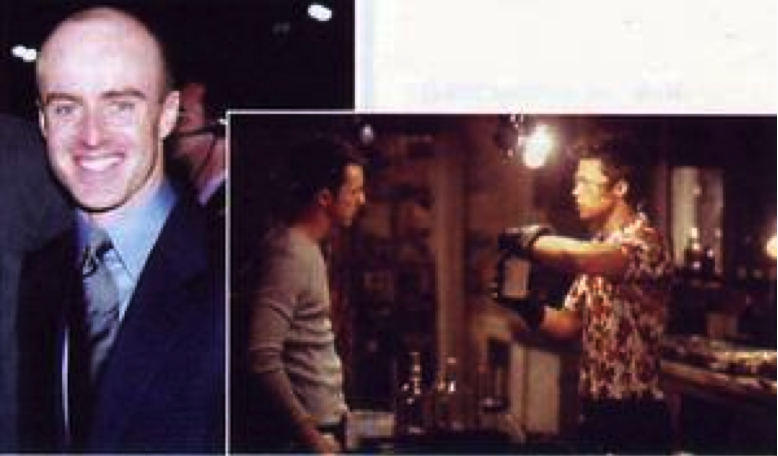 The stories being recounted don’t incite people to go out and drink (and if ever there were a crowd prone to do so — it would be this one). They don’t lead to the moral disintegration of the group or society. In fact, the opposite happens.

People are brought together in a deeper understanding of the malaise they suffer. People see themselves in the stories being recounted. Some are terrified of sinking that low. Some are thankful they haven’t sunk that low already. All are relieved they have a forum where they can express themselves and be heard. After dealing with their affliction on their own, they find comfort in knowing they are not alone. A burden shared is a burden halved.

Going to the cinema can be a similar experience. We sit in the collective dark as a film spews forth with the horrors and wonders of being human. Like 12-step programs, we don’t interrupt. We allow the filmmaker to share, share him or herself completely.

We are told of humans in love and in anger, of humans making big mistakes and great sacrifices. We sit there, by choice, taking it all in and we see ourselves. We hear our frustrations and our hopes being projected before us.
And it can be cathartic.

FIGHT CLUB more than any other film in recent history, is that brutally honest confession. An unapologetic revelation of the frustration of living in a world reduced to sound bites and media buys and semi-disposable Swedish furniture; a guest speaker at the front of the room ripping his or her world open for all to see. And it is not done to incite people to do anything other than listen to the story, as horribly or gloriously human it might be.

But above all, we will have been touched, pummeled maybe, by someone else’s expression of what the world is like for them. And for some, listening in the dark, it will be cathartic.