“If you want comfort in your movies, don’t see FIGHT CLUB,” warns producer Ross Grayson Bell of his latest flick.

FIGHT CLUB, in which Brad Pitt and Edward Norton embrace violence, repulsed some US reviewers. But Sydney-born Bell, 37—who’s lived in LA for 10 years—believes his countrymen will be more accepting. “In Australia there’s a resistance to the Hollywood formula … FIGHT breaks the mould.” But convincing studios to KO that stereotype was a battle in itself for Bell.

One major studio’s rejection of the manuscript for, they claimed, its “uncomfortable quality” only spurred him on: “The reasons they gave not to make the book into a film were exactly the reasons I had to!”

Besides, he insists, ribs aren’t just busted, they’re tickled, too. “It’s all right to laugh,” says Bell, now working on the drama LAMBS OF GOD with Winona Ryder. FIGHT CLUB, he maintains, is “a very funny film.” 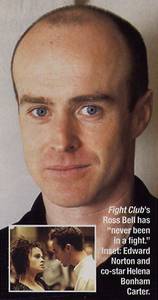