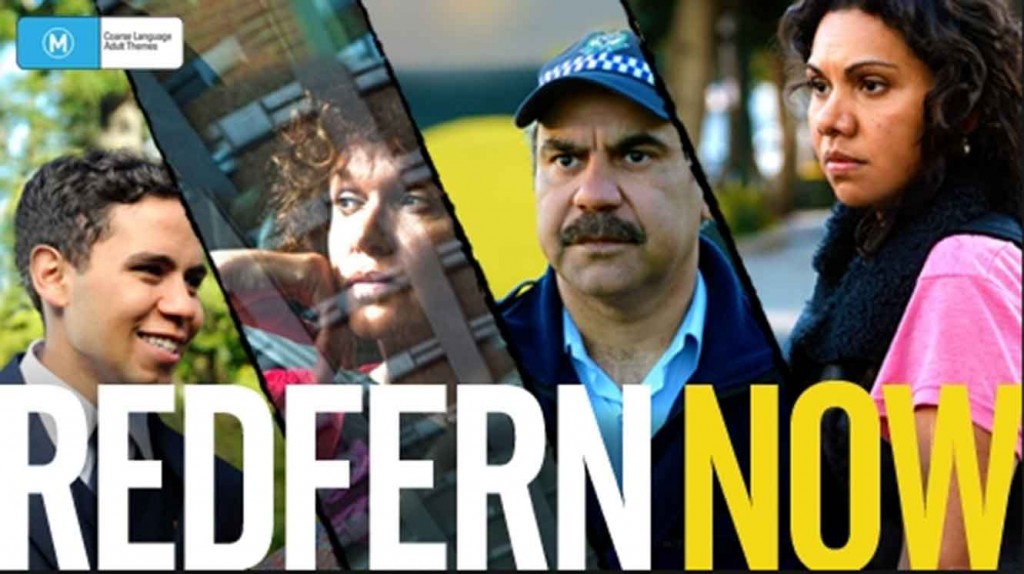 It was hailed as a watershed moment for Australian television writing. “Some of the finest small screen storytelling this country has ever seen,” wrote Crikey. “Worthy of a standing ovation,” said the Sydney Morning Herald.

The first series of Redfern Now screened in 2012, and took out the Logie Award for Most Outstanding Drama as well as a Deadly Award for TV Show of the Year. Series 2 won Best Television Drama at the 2014 AACTA Awards.

So when two of the show’s writers, Steven McGregor and Jon Bell, joined independent producer and screenwriter Ross Grayson Bell for a festival panel on Wednesday, the Bloomberg Stage was filled with a capacity crowd.

“Years ago, it would have been impossible to get an all-indigenous prime time series on the air,” said Grayson Bell, head of screenwriting at the Australian Film Television and Radio School (AFTRS). “Indigenous filmmakers such as Warwick Thornton (Samson and Delilah), Wayne Blair (The Sapphires) and Rachel Perkins (Bran Nue Day), among others, have not only repositioned indigenous characters and stories from peripheral to central roles, but they have brought huge audiences with them.”

Mr McGregor and Mr Bell are among the new wave of storytellers driving that change. From the Northern Territory, Mr McGregor recently graduated from AFTRS after initially training and working with the Central Australian Aboriginal Media Association in Alice Springs prior to branching out as a writer and director. He has written four episodes of Redfern Now.

Mr Bell was raised in Casino in northern NSW, where he still lives. In 2007 he began writing the recently screened ABC drama, Gods of Wheat Street, which he describes as a black Home and Away (Grayson Bell says the cast call the show Black to the Rafters). As well, he has written two episodes of Redfern Now.

The landmark show was undoubtedly a critical and popular success. But some may see an irony in the fact the script producer for the multi-award winner is a British import.

Not just any import, of course, but internationally acclaimed screenwriter Jimmy McGovern, creator of Cracker, The Lakes and The Street among other works. Grayson Bell asked what it was like working with somebody from so far outside their own culture. “Here you are with the ability to tell your stories as you see them,” he said, “and the network brings in this man from Liverpool, UK.”

“Also he’s not Australian, so he didn’t know blackfellas and he wasn’t scared to ask questions. Like, sometimes, it was ‘Jimmy – don’t ask that!’ But that’s what makes him such a great storyteller. Because he’ll say, ‘We need to tell a story about this’, where we might’ve pulled back and gone, ‘Ah, I don’t know if I want to go with you with that subject.’ ”

The process was “all driven by us”, Mr McGregor said. “Jimmy was just there to shape the story dramatically. We had to teach him as well.” He found working on the series tough but rewarding.

“I think everyone valued Jimmy’s point of view and his take on things,” Mr McGregor said. “I mean, he’s brutal: he’ll tell you if it’s rubbish. He calls [unnecessary dialogue] ‘furniture’. ‘What is that furniture doing in there?’ he’d say. He’ll want to wring every moment of a story. He’ll just torture it and torture it and torture it. But it’s exciting because it pushes you. And then you’ll have a beer at the end of the day. It’s not personal. Sometimes you’ll take it personally because he can be hard. But I loved it.”

And so did the critics and the viewers. Mr Grayson Bell noted that it “was one of the first shows in a long while to get over a million viewers, which in today’s landscape is a huge audience.” Mr McGregor said the public’s response “blew us away. My kids started talking to me and thinking I was cool – ‘Dad writes for Redfern Now’.”

But has the success of Redfern Now changed the landscape of Australian TV in terms of how indigenous stories will be told in future? “I hope it’s not a trend or a fad or a fashion,” Mr McGregor said. “I think it’s up to us to maintain that level of storytelling. To be strong in our stories.”

Mr Bell agreed. “We have to keep putting good stories out there that people respond to. Sometimes when you do draft after draft, and you get back opinion after opinion, you’ll go a bit crazy. But once you’ve pushed yourself to the limit, you somehow have to clear your head and dive back in and say, ‘I’ve just scratched the surface, but now I’m really ready to tell the story.’ Even though you’re up to your umpteenth draft. Because it’s all about the story.”