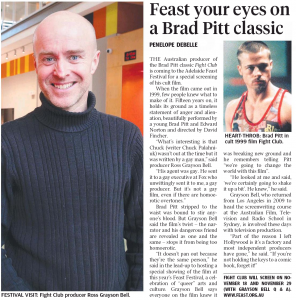 The Australian producer of the Brad Pitt classic FIGHT CLUB is coming to Adelaide Feast Festival for a special screening of his cult film.

When the film came out in 1999, few people knew what to make of it. Fifteen years on, it holds its ground as a timeless statement of anger and alienation, beautifully performed by a young Brad Pitt and Edward Norton and directed by David Fincher.

“What’s interesting is that Chuck (writer Chuck Palahniuk) wasn’t out at the time but it was written by a gay man,” said producer Ross Grayson Bell.

“His agent was gay. He sent it to a gay executive at Fox who unwittingly sent it to me, a gay producer. But it is not a gay film, even if there are homoerotic overtones.”

Brad Pitt stripped to the waist was bound to stir anyone’s blood. But Grayson Bell said the film’s twist – the narrator and his dangerous friend are revealed as one and the same – stops it from being too homoerotic.

“It doesn’t pan out because they are the same person,” he said in the lead-up to hosting a special showing of the film at this year’s Feast Festival, a celebration of “queer” arts and culture. Grayson Bell says everyone on the film knew it was breaking new ground and he remembers telling Pitt “we’re going to change the world with this film.”

“He looked at me and said, ‘we’re certainly going to shake it up a bit.’ He knew,” he said.

Grayson Bell, who returned from Los Angeles in 2009 to head the screenwriting course at the Australian Film, Television and Radio School in Sydney, is involved these days with television production.

“Part of the reason I left Hollywood is it’s a factory and most independent producers have gone,” he said. “If you’re not holding the keys to a comic book, forget it.

FIGHT CLUB will screen on November 18 and November 29 (with Grayson Bell Q & A). www.feast.org.au