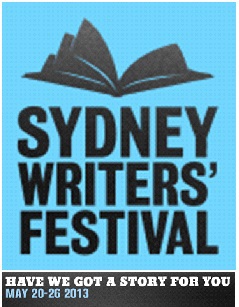 I love the Sydney Writers’ festival, there is something for everyone’s tastes. I haven’t been to the festival in a couple of years, so when my friends sent around their preferences for what they were going to see at the festival, I went online and had a look at what was on offer.  I basically trawl the free sessions and this time there was only a couple of sessions I wanted to see, one in particular was a discussion panel on The Tall Man book and documentary Adapting Reality: The Truth is in the Detail. I read the book last year but I haven’t seen the documentary yet and I was interested in how they adapted the book into the documentary. The Tall Man is the story of Palm Island, the tropical paradise where one morning Cameron Doomadgee swore at a policeman and forty minutes later lay dead in a watch-house cell. It is the story of that policeman, the tall, enigmatic Christopher Hurley who chose to work in some of the toughest and wildest places in Australia, and of the struggle to bring him to trial. Above all, it is a story in luminous detail of two worlds clashing – and a haunting moral puzzle that no reader will forget. I met my friends Bind and Shell on a beautiful sunny autumn day, at Walsh Bay before Shell and I went into the panel discussion.

The panel was the film’s Director Tony Kravitz (Dead Europe), Producer Darren Dale (Redfern Now) and the book’s author, Chloe Hooper, as they discussed with Ross Grayson Bell (Fight Club) the power of adapting real life events to books and film. Is the truth really in the details?

I really enjoyed the discussion during the panel session. The discussion started with a clip from the documentary and a comment from the author as she immediately noticed the dramatic power of seeing images on screen rather than reading the events in a book. She said that documentary is such a powerful medium and it was a decision that was made for the team as the screen rights to the movie were already gone, so they had to make a documentary. The panel commented that people involved in the story were given a chance to have their say in the documentary as many witnesses were discounted or unwilling to speak in front of the court. Some points that I remember from the discussion:

After this session at the writers’ festival, it was evident that the documentary was watched by more people than who bought and read the book, so the story has reached more people through the medium of documentary. But I left asking myself about the role of the documentary. A question asked by the panel MC Ross Grayson Bell to an audience member, “did watching the documentary change your behaviour” stuck with me. Are documentaries meant to ‘change’ the viewer into acting in some way or is it just another vehicle of storytelling? Maybe it is neither, as The Tall Man documentary makers outlined, their documentary was meant to be a historical record of the events that occured for legacy archive purposes rather than a vehicle for change.

The day that I went to the festival, I didn’t even realise that it was Sorry Day, even though I read the description of the event online. And this coincided with both the beginning of reconciliation week and indigenous round in the AFL. After realsing this, I asked myself whether I knew what reconciliation week actually was and I didn’t so I investigated further on http://www.reconciliation.org.au/nrw and re-created some of the information pdf from the website here:

3. What is the significance of 27 May and 3 June? May 27 and June 3 are important dates in Australia’s history. May 27 marks the anniversary of the 1967 referendum when Australians voted to remove clauses in the Australian Constitution that discriminated against Aboriginal and Torres Strait Islander peoples. The day before National Reconciliation Week, 26 May, is National Sorry Day, which was first held in Sydney in 1998 and is now commemorated nationally to remember and honour the Stolen Generations. June 3 marks the historic 1992 Mabo decision in which the High Court of Australia recognised native title—the recognition that Aboriginal and Torres Strait Islander peoples’ rights over their lands did survive British colonisation. 2012 marked the 20th anniversary of the Mabo decision and the 45th anniversary of the 1967 referendum.