I was honoured last year when Dr. Kathryn Heyman invited me to join the Betty Roland Scriptwriting judging panel at the NSW Premier’s Literary Awards alongside fellow judges, Christine Olsen (screenwriter and producer of RABBIT PROOF FENCE) and Tom Hegarty (screenwriter BLUE HEELERS, A TOWN LIKE ALICE). Today, after hours of reading and deliberation, we agreed on a short list of three, brilliant writers. Read more to see the short list and the judges’ comments: 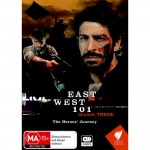 From its opening scene of gang members pressing an impressionable, fifteen-year-old, Islander boy into carrying out an assault, Michelle Offen’s episode of the ground-breaking and critically acclaimed series EAST WEST 101 explodes off the page. It drags the reader, and ultimately the viewer, into the seamy underworld of gang violence in the racially diverse suburbs of western Sydney, where loyalties to one’s community are pitted against the laws of the land and the police officers sworn to uphold them and vice versa. Indeed, when Islander detective, Sonny Kao, discovers it was his young cousin who was responsible for assault and a subsequent string of armed robberies, he risks his hard-fought-for career by turning a blind eye to the evidence. His hope that his cousin will lead him to the gang mastermind has tragic consequences.

Hard-hitting and richly complex, Offen weaves this episode-specific storyline with ongoing, season-long storylines – which similarly deal with the fine line between doing the right thing and getting results – into a unique and complex tapestry, unseen in Australian television. Her storylines cleverly resonate with one another, giving a multi-faceted perspective on the episode’s theme of the price of salvation. With troubled characters struggling with their own demons, she has brought vividly to life a world most of us only read about in the papers. More importantly, Offen has given her characters – and us, by proxy – the way out of the violence and personal degradation. As Detective Kao points out when the innocent mother of his young cousin is killed by a bullet meant for the boy: ‘Be an example to your people, show them it’s never too late to act. That’s how you make sense of this. It’s the price you pay. For salvation.’

Peter Duncan has created a remarkable character in Cleaver Greene. A barrister, highly skilled in the courtroom, his opponents never know what sort of rabbit he’ll pull out of the hat to defend his—usually guilty—clients. In the main his clients look like hopeless cases. Cleaver, you could say, is their court of last resort. He can be relied upon to find a different angle that nobody else would dream of, let alone put into practice. But in his private life he’s totally unreliable. He’s a womaniser; make that sex-addict; gambler—with ongoing gambling debts for which he’s physically punished (and no hard feelings). He snorts cocaine; has a running battle with the Taxation Office; owes alimony to his ex-wife; has a son who’s at risk of following in his father’s footsteps. Sex-wise, at least. From the foregoing, you may suspect Cleaver is not the ideal role model as a dad.

In this introductory episode, Cleaver’s main client is a respected academic charged with murder and cannibalism. The professor admits to the cannibalism but denies murder. He maintains the ‘victim’ committed suicide; that the cannibalism was by mutual consent. Cleaver is able to prove the victim did indeed commit suicide. And as cannibalism is not illegal in NSW the professor has no case to answer. This is the sort of approach at which Cleaver excels—while at the same time deftly juggling the balls of his shambolic private life. The screenplay is well constructed, fast moving, witty and a convincing testament to the quirkiness of the law. Cleaver, of course, steals the show.

SNOWTOWN (Warp Films & Film Victoria)
Shaun Grant
Our mind shies away from the horrors of the serial killer but Shaun Grant’s script, SNOWTOWN, places us inside the mind of a young man, Jamie (16), as he is groomed to take part in a series of brutal, sadistic murders and we, like him, seem to be rendered helpless. It is almost impossible to bear the reading of this script as it moves unrelentingly into ever darker reaches of human experience. The script is unflinching in its depiction of a dystopian world where everyone is pretty much on the scrap heap. It’s a world which is painful to read about.

Shaun Grant’s style is perfectly apt — spare and unflinching — we can almost smell the poverty. There is an extraordinary interweaving of the terrible, the macabre and the cruel with the most ordinary, mundane and tedious of events. Nor is there any respite — no looking away, no comfort. And into this world steps, fully formed, a monster, but he’s in disguise. He’s come to help, to get the place sorted, to cook nutritious meals, to somehow care. Like Jamie, we are fascinated and repelled. The characterisation is superb. These are entirely formed, fully-fledged human beings. Everything and everyone is entirely believable. There is not one superfluous detail. No let out. No remorse. It gets you in its grip and will not let you go. And so it begins and so, seemingly, it must work out its grisly course. This is a very hard script. It takes us into a kind of hell. And yet this hell happened — and it happened in our midst, in suburban Australia. It raises deep questions about our, the human, capacity for utter inhumanity. A deeply sobering script.